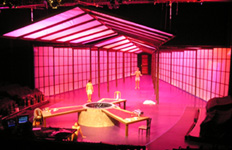 Overview of Theater and Art
I've worked as a sound designer, set designer, technical director, lighting designer, video designer, and master rigger for professional regional theaters, off-off-broadway shows, and college productions. A photo gallery of some of my designs and tech direction is available here, while I have links to some of my sound and video designs below. With the time constraints of my current career, I rarely do theater anymore. Most recently, I sound designed Citizen of Me (chor. Becca Alaly), which was part of the White Wave Dance Festival in Brooklyn in October 2013.

As part of Golan Levin's Spring 2012 Interactive Art & Computational Design class, I made an interactive installation of household devices that responded exclusively to gestures, an interactive sound installation in which the participants sounded like giants, and an LED light visualization that used a constantly changing family of distinct colors that moved through the color spectrum in a flock.

In 2006, I was president of the Harvard Radcliffe Dramatic Club, one of the three largest student organizations on campus. I was involved in a number of college productions.

Sound Design
Taken from my design for Killing Game at the American Repertory Theatre's IATT, this representative mp3 was a government propaganda "public service announcement" that played during the pre-show. The characters worked to cover up "the plague" with text inspired by Leave it to Beaver.

This soundscape combining a child speaking with my Moroccan drumming is taken from Chunk in 9 Pieces, which premiered in NYC at the Merce Cunningham Theatre.

I created this video montage showing duality, contradiction, and double vision for Chunk in 9 Pieces.